Hendra: why not just go ahead and vaccinate?

No vaccine is entirely risk-free. The published data on the HeV vaccine indicate that while adverse effects do occur, they’re uncommon and are generally short-lived and treatable.

Official reports of adverse effects following HeV vaccination indicate a rate of less than 0.25% of doses given. That's less than 1 in 400 doses.

However, not all vaccine reactions are identified as such, and not all are reported to the manufacturer or the governing body (Australian Pesticides and Veterinary Medicines Authority).

A recent UK study of vaccination practices involving 304 equine vets found the following:
* 66% of the vets encountered adverse events following vaccination in the past year
* the vets noted a total of 2,760 adverse events
* but only 19% of these cases were reported to the governing body
* reactions included stiffness (931 horses), injection site swelling (835 horses), lethargy (559), and fever (355 horses)
* most reactions were transient
* even so, 86% of vets reported vaccine hesitancy from horse owners due to perception of over-vaccination, cost, and concern about adverse events

Rumours persist among horse owners that the HeV vaccine causes "lots of problems," including death.

A Class Action lawsuit, filed against Zoetis by a group of horse owners, is currently making its way through the federal court. The suit claims that Zoetis both understated the risks of their HeV vaccine and overstated the risks of HeV infection to horse owners and veterinarians. Although the suit has its problems (the claim has been revised several times) and its ultimate success is in doubt on legal grounds, a federal judge has ruled on more than one occasion that the claim has merit and should proceed.
At the present time, the case is in mediation.

There have been a couple of papers published in veterinary journals on why horse owners are reluctant to vaccinate against HeV, but not much — and for me, not enough — on the safety and effectiveness of the vaccine under ‘field’ conditions (real-world use).

In the one field study that's been published to date on the safety and effectiveness of the HeV vaccine, the study began with 57 horses; by the first annual booster, only 29 horses remained in the study group, and by the second annual booster only 26 horses remained. So, the safety and effectiveness of this vaccine under field conditions is based on data from less than 30 horses.

More on effectiveness later. Here is the official list of adverse effects reported for the HeV vaccine. I should note that they’re typical of equine vaccines, and nothing on the list is unique to the HeV vaccine:

- swelling and soreness at the site of vaccination

- muscle stiffness and swelling in the joints (oedema)

However, a snapshot of just one year of adverse event reports tells a rather more disturbing story. This link summarises the reports logged in 2015. Here is a screenshot of the HeV vaccine page. 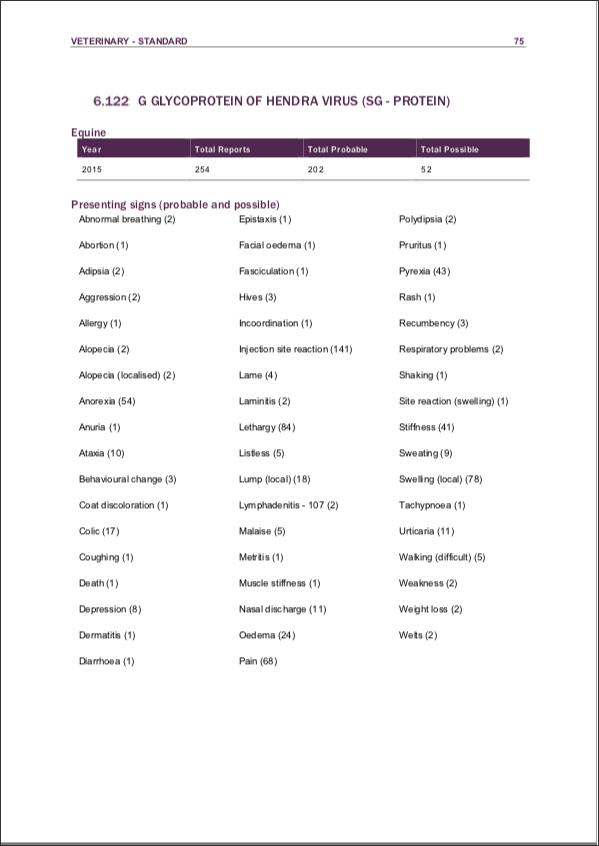 By the way, Zoetis warns that the vaccine should not be used in horses who are sick or immunocompromised. That's standard language for animal vaccines. However, that “fine print" often gets overlooked. So, too, does the fact that the potential for interaction with other vaccines and medications is unknown. The HeV is still a relatively new vaccine, in relatively limited use (Qld and northern-mid NSW).

Now to the nuts and bolts of the vaccine itself.

The Zoetis HeV vaccine is of a type called a subunit vaccine. It does not contain any live virus, nor even any whole virus, alive or dead. It contains a surface protein, called the G glycoprotein or simply G protein, that HeV (and the closely related Nipah virus) uses to attach to the horse's cells, which is a necessary first step in gaining entry. That particular component of the vaccine appears to be highly effective at eliciting a protective immune response without much risk.

However, the HeV vaccine also contains proprietary adjuvants (substances designed to "goose" the immune response to the G protein subunit) and thiomersal.

That last one first: Thiomersal (aka thimerosal) is a mercury-containing substance that is added to many vaccines as a preservative. It's a controversial addition because mercury is a potentially toxic heavy metal that accumulates in the body with repeated exposure. Thiomersal is also a potential allergen.

In the United States and the European Union, thiomersal is no longer used in vaccines intended for use in children.

Zoetis hides their specific adjuvant formulation behind the word "proprietary," but a 2016 review article of HeV and NiV vaccine development might have let the cat out of the bag. In describing the development of a HeV soluble G protein subunit vaccine, the authors discussed the use of two adjuvants: Alhydrogel™(aluminium hydroxide gel) and CpG. Both are used in vaccines to stimulate specific components of the animal's immune response.

Aluminium hydroxide boosts the antibody-mediated immune response to the core vaccine component. However, aluminium is another metal not known to have any physiological function in mammals yet with potentially toxic effects in large amounts.
CpG (Cytosine and Guanine triphospate deoxynucleotides with a phosphodiester link) is a short, single-stranded, synthetic DNA molecule that is used in vaccines as an immunostimulant. Specifically, it mimics the presence of pathogens (disease-causing microbes) such as viruses. Its 'pathogen-associated molecular pattern' is recognised by a couple of different types of immune cells (B lymphocytes and dendritic cells) that have specific roles in a targeted immune response to invaders such as viruses.

Either of these substances may be responsible for the adverse effects that occur after vaccine administration in some horses, because either can result in an exaggerated inflammatory or allergic response to the vaccine.

Note that an exaggerated inflammatory response is also at the heart of severe illness and death in fatal HeV infections.
We have long needed more research into vaccine-associated illness and individual susceptibility to vaccine reactions in animals. These issues are such a problem in cats, for example, that adjuvant-free vaccines have been developed for use in dogs and cats. In this regard, equine vaccine research and development is way behind, and we urgently need to catch up.

Typically, vets manage horses who have had vaccine reactions in the past by pre-treating them with an anti-inflammatory drug (usually an antihistamine or nonsteroidal anti-inflammatory drug) at their next booster. Usually, that is an effective approach when the horse simply must be vaccinated for whatever reason.

However, a reasonable alternative with HeV is to weigh the risk of exposure/infection against the risk of a potentially severe vaccine reaction, and, if appropriate, use avoidance measures to manage the horse's risk of infection.

Cell-mediated immunity can last a lifetime, and it's an under-appreciated aspect of both naturally-acquired and vaccine-induced immunity.
The point of booster vaccination is to maintain a protective level of the specific antibody in the bloodstream, particularly during the periods of high risk. However, low or even undetectable amounts of HeV antibody in the horse's blood do not necessarily mean that the horse is unprotected.
If the horse has ever encountered HeV or its G protein in the past, it will likely have some cell memory which can be activated to ramp up HeV antibody production when the horse is next exposed to HeV. The issue then is one of 'dose' (i.e., how many viral particles has the horse inhaled or ingested): can the horse make enough virus-neutralising antibodies in time to block the exponential growth of HeV in the body? And can the rest of the horse's arsenal of immune responses deal with the virus in the meantime? Here is where avoidance measures support the horse's innate and adaptive immune response to help protect the horse from the severest consequences of viral exposure.

Until we know who is most susceptible to vaccine reactions and why, every horse is potentially at the same risk. Even though that risk may be low, it's not zero. Knowing how your horse responds to other vaccines (tetanus or strangles) and to other invaders such as biting insects may provide a clue as to the likelihood of your horse having a potentially severe reaction to the HeV vaccine.

A HeV vaccine of the same type is currently in human phase I clinical trial in the US. This study examines the safety and 'immunogenicity' (elicited immune response) of the vaccine. The study is expected to be completed in October 2021.
A recently completed study of a HeV-specific antibody product in 40 healthy volunteers showed it to be safe for use in the treatment of HeV infection in humans. In fact, it has already been used in 13 people in Queensland since its development in 2010.
The argument that we must vaccinate horses to protect humans is losing ground by the day.

1. breath, vital force, soul, spirit; 2. (a) the unconscious or true inner self (vs. persona, the outer aspect of the personality); 2. (b) the feminine principle (vs. animus, which represents the masculine).