Note: this article was written for a Thoroughbred trainers' magazine in the US.
While it is focused on racehorses, the information applies to all performance horses.

Equine gastric ulcer syndrome (EGUS) remains a serious problem in racehorses and other performance horses. Sometimes in obvious ways, but often in more insidious ways, it robs both horse and owner by compromising the horse’s appetite, feed efficiency, condition, comfort, and willingness to work. Were we to be able to accurately calculate it, the amount of money lost to this disease would probably be staggering.

GastroGard[R] (omeprazole paste) has been a great leap forward in our ability to treat and prevent EGUS, particularly in horses who must remain in training. But there’s no denying that long-term treatment with this drug is costly. Changes in diet, feeding schedules, housing, turnout, exercise, and other management factors are important and they help many of these horses. But the fact remains that strenuous exercise is a major contributing factor with EGUS, and it simply cannot be avoided in horses in race training.

Why are racehorses prone to ulcers?

Why galloping increases the risk for EGUS is still not fully understood, probably because it encompasses a number of different factors. One of the most interesting involves an increase in pressure within the abdomen that occurs during exercise at any gait above a walk. When horses move, their abdominal muscles contract to help support the back and pelvis, and perhaps also to limit movement of the intestines and other abdominal organs. This muscle contraction increases the intra-abdominal pressure, and the amount of pressure parallels the gait or speed at which the horse is moving, increasing from the walk to the trot to the gallop.

The study which showed pressure increases in the abdomen and stomach during exercise also showed an increase in acidity in the upper portion of the stomach which followed the same pattern of increasing with exercise intensity. Both pressures and acidity dropped again once the horse slowed to a walk.

So, exercise does two potentially destructive things with regard to the squamous lining of the stomach:

The more intense the exercise session or the longer it lasts, and the more often it is repeated, the more acid erosion is likely to occur. We could add that exercise within about 4 hours of a meal, when acid secretion is at its peak, may further contribute to ulceration.

This effect also helps explain the high prevalence of gastric ulcers in Standardbred racehorses, endurance horses, hunters/jumpers, and in various other breeds and sports. The effect may be relevant to other species as well. For example, one study found that almost 50% of the dogs running the marathon Iditarod sled race in Alaska had gastric ulcers.

But that’s only one factor. Strenuous exercise also causes:

...all of which may slow the rate of cell turnover and repair in the stomach.

In other words, the squamous cells which protect the upper portion of the stomach lining are replaced more slowly than normal, so any minor or intermittent acid erosion can accumulate over time, eventually resulting in ulceration. To make matters worse, the damage is repaired more slowly if the horse remains in training.

Those exercise-associated factors account for a good deal of the ulcer incidence in racing animals. But they don’t explain the prevalence of gastric ulcers in broodmares (both pregnant and open) and foals, nor in livestock such as pigs and cattle. There is much more to this syndrome than exercise-induced physiological changes.

Other physical and psychological factors shown to contribute to gastric ulcers include:

A study of gastric ulcers in show horses confirmed that horses with a nervous disposition were more likely to have ulcers than were calmer horses. The same very likely is true in racehorses. Although “stress” is one of those words that has been rendered almost meaningless through misapplication and overuse, stress is nonetheless real — and it can cause real problems.

How can adaptogens help?

That’s where adaptogens come in. Adaptogenic herbs can help with both the treatment and prevention of EGUS because they help:

Some of these herbs, such as Aralia species, have even been shown to be as effective as the anti-ulcer drug cimetidine (Tagamet[R]) in treating and preventing gastric ulcers.

Many different herbs have adaptogenic properties. The most commonly used and extensively studied include these:

Several of the medicinal mushrooms also have adaptogenic properties.

Tables 1 and 2 (at the bottom of the page) summarize the most common effects of the adaptogens that are particularly relevant in athletes. But the properties and potential of the adaptogens can be summed up even more simply: better cell function, repair, and resistance. That translates into better function, repair, and resistance — i.e., resilience — of cells, organs, and the system as a whole.

The practical benefits for racehorses include these:

Another possible benefit, provided by Rhaponticum in particular, is a positive effect on bone metabolism. Together with an increase in protein synthesis and lean muscle mass, this effect may help protect against, or speed recovery from, overload-induced bone damage such as bucked shins, chip or stress fractures, and sesamoiditis.

How simple plant extracts can do all that is a subject for another time, as it centers around a complex biochemical role of “molecular chaperone” in cell function, resistance, and repair. Adaptogens are among the most widely researched medicinal substances, with good safety profiles, extensive laboratory and clinical studies, and a long track record of use in human athletes. (If you haven’t heard of them already, it’s probably because most of the research and use in athletes has been done in Europe.) When used as part of a good management and training program, the adaptogens can help get and keep the hard-working horse performing well and going strong.

Where to find them

Most of the adaptogenic herbs listed above can be found singly or in various combinations wherever herbal products are sold for humans. However, for both safety and convenience, it’s usually best to stick with products that have been formulated specifically for horses, with good quality control and appropriate dosing instructions.

One of my favorites is APF Pro (auburnlabs.com), which was formulated by an equine veterinarian for use in equine athletes. I do still buy individual adaptogenic herbs and use them either singly or in custom combinations for individual patients, but I use the APF products in most cases. Not only are they convenient for use in busy barns and at events, but I appreciate the fact that the company is committed to quality control and to veterinary research. Also, their products can safely be used in athletes competing under jurisdictions with strict medication rules.

In closing, GastroGard or other veterinarian-recommended medication is usually the best way to go when ulcers are present. And while GastroGard may also be used at a reduced dosage for ongoing ulcer prevention, adaptogens are well worth considering for this role, too. Not only can they aid in ulcer prevention, they support the entire system under the stress of training and competition, increasing the horse’s resilience and thus his overall capacity to stay healthy and compete to the best of his ability. That makes the adaptogens both good medicine and good sense.

Table 1. Physical effects of adaptogens that are particularly relevant for athletes. 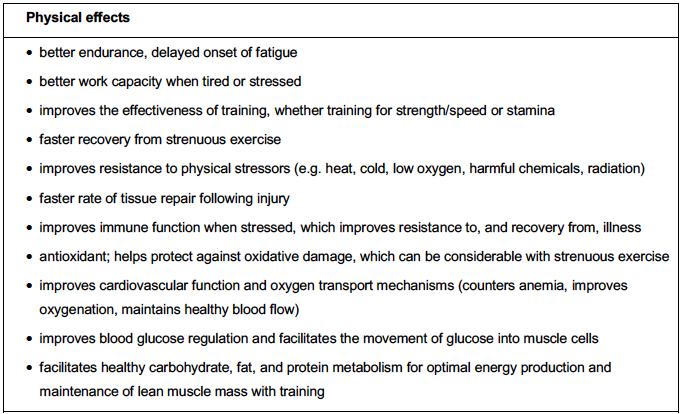 Table 2. Psychological effects of adaptogens that are particularly relevant for athletes.

1. breath, vital force, soul, spirit; 2. (a) the unconscious or true inner self (vs. persona, the outer aspect of the personality); 2. (b) the feminine principle (vs. animus, which represents the masculine).